This is the true story of our own CMO, Brittany, and how her now-fiancé, Sam, secretly designed the perfect custom ring for the ultimate surprise proposal.


How did you two meet?

Sam: Brittany and I first met at an advertising agency here in Milwaukee. Funny story, my mother was the one who hired Brittany. I remember the day she told me about her new hire. She said, “Hey, I think I just hired your future wife. No pressure!” Brittany and I became good friends over the next year, and then I demanded I be out of the friend zone and here we are. That was 4 and a half years ago now. Feels like yesterday.

Brittany: When we first met, I wasn't thinking we'd ever end up together. He was interning at the ad agency where his parents and I worked—actually, I was working directly for his parents, putting dating far from my mind. From my lens, he had an uphill battle! He'd swing up to my office for random reasons over the next 2 years, we'd hang out and walk to coffee daily. We were best friends for almost two years before I summoned the courage to tell MY BOSS (Sam’s mom) that I liked him. Turns out they were all rooting for us and were hoping we'd get together. Phew!

Tell us your proposal story!

Sam: For anyone who knows Brittany, I think all of them would concur that she loves to be in control of the situation in some way. She knew I was in the process of designing a ring and it drove her crazy that I kept her in the dark on this. I wanted it to be special and something that she had no say in, contrary to her everyday life. Unbeknownst to her, I had her co-workers and friends in on the process so I had a general idea of what she was looking for.

Brittany was heading to New York for a work event and I realized this would be the perfect time to catch her off guard. She becomes so laser-focused when away for work trips, I knew she wouldn’t see it coming. I coordinated with a hotel in New York, as well as her co-workers that were accompanying her on the trip. Brittany was under the impression that she was walking into a meeting at The Dominick Hotel. She had no idea that meeting was with me and not a magazine editor! That morning, I took the 6am flight from Milwaukee to New York, cabbed to the hotel, and with a half hour to spare I made it to the hotel room. Legs shaking, I heard Brittany and her two co-workers walk up to the hotel room door, knock twice, and then proceed to come in. Surrounded with flowers and a great view of the city, I pulled Brittany towards me and she said, “So I don’t have a real meeting with the New York Times editor?!” I chuckled and said a bunch of nice things about her (which she can’t recall). She said yes! And we stayed an extra night in New York and somehow landed tickets to Hamilton. What a day!

Where did the inspiration for the design come from?

Sam: I knew Brittany liked something with a little vintage spunk to it. Timeless. I drew inspiration from a vintage custom Cartier wedding ring. That ring is a bit over the top, but I pulled ideas from it and adapted them in my own way. Her team of secret helpers were instrumental in adding the small finishing details that made it so successful.

Brittany: Poor Sam. Working in the engagement ring industry means I play with rings all day, every day. I see the trends, newest styles and watch all the custom creations that come through the office. I had a new favorite concept a day. I found reasons to love anything from an East-West marquise to a low profile embellished bezel. Being that this is a symbol of OUR love and the price tag of that symbol affects our future, we had many talks about what we wanted the ring to be. Designing just felt right.

How was the design process?

Sam: The design process was great. The people at Forever Artisans were so helpful in taking an unclear vision of mine and turning it into something tangible. I would constantly send them things I liked from random one off rings I would find and they would find a way to incorporate that detail in our ring. The designers were prompt, friendly and made my vision a reality. Super happy! 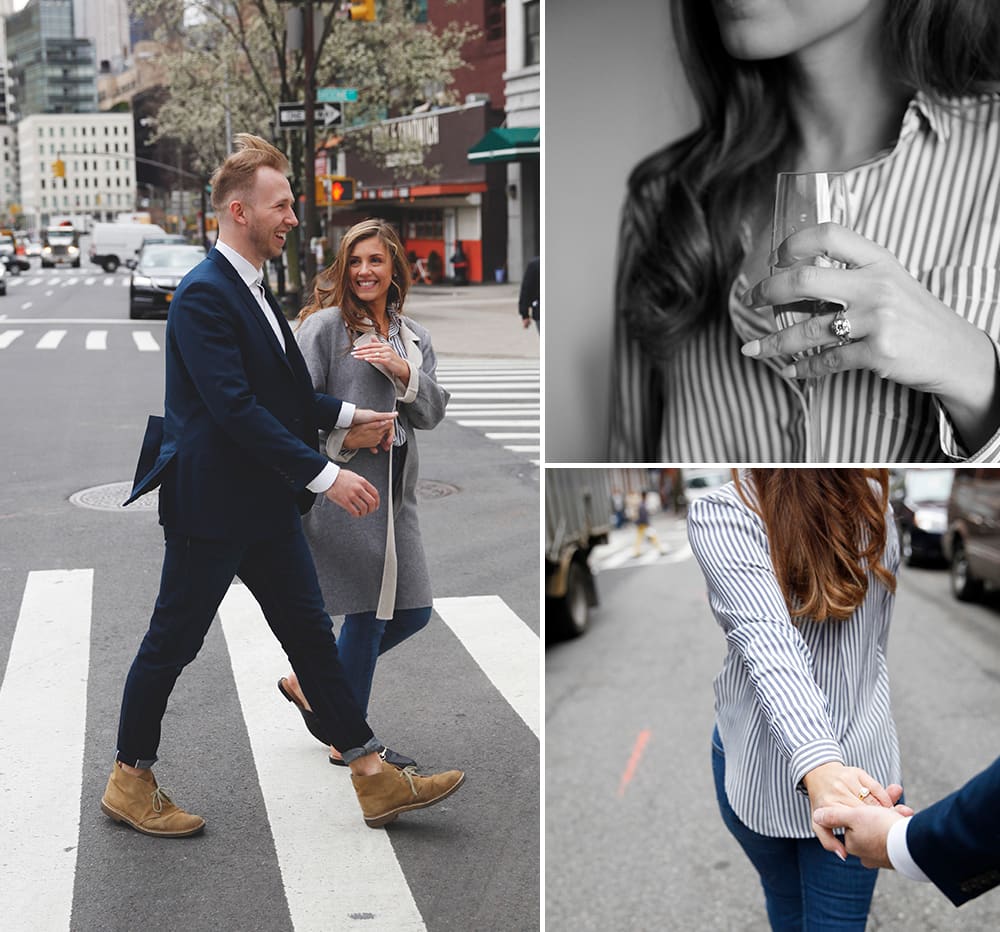 
Brittany: The design process was LONG! What Sam did was genius. He knows me so well. He put blinders on and picked three influences; two from my Pinterest page and one gem of knowledge from something I said at home on multiple occasions. Here they are: the first ring I ever loved was a vintage Cartier piece that was made custom in the early years of their design house, the second was a double bezel yellow gold ring with an 6mm band (that’s thick!), and the last "gem of knowledge" was that I LOVE claw prongs. I'm sure I'm not giving him enough credit; maybe he had 100 influences, but this is what I get the sense of. He worked for the better part of a year with our designers, going back and forth trying to get it just right. On many occasions I tried to barge my way in to no avail! He knew that my influences change so frequently that taking this into his hands would ultimately be liberating for me. He was right. Knowing how much time he spent looking at every component of this piece, tweaking, lamenting, all to create something that felt like me—it just kills me. I love it and I am actually liberated. Being in the industry means that people always wonder what my taste is, looking to see if I’m on trend, or asking me what I would design if I could design anything... it’s overwhelming. Sam killed himself to create a symbol of our love, not my current design preferences. This piece will stand the test of time. 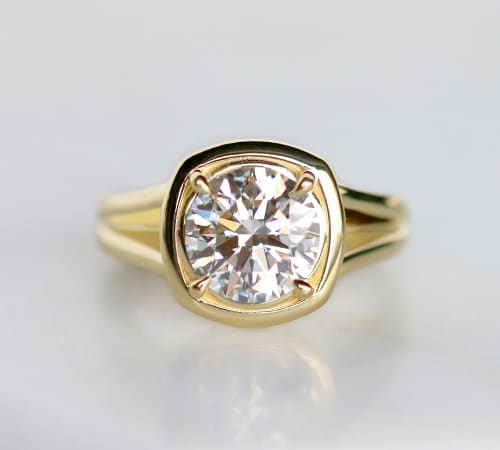 Did we meet all of your expectations from designed image to finished piece?

Sam: Yes. 100%. We went back and forth a lot. I was constantly pestering them and they always got back to me quickly with an answer. I was probably a bit overwhelming and needy at times. From initial sketches, to wireframes, to CAD renderings, I always felt like I had a good grasp on where the ring was at and it was great to see it progress through those steps.

posted on 5/25/2018 11:15 PM
Not only is this story very touching, but the ring is perfect. I absolutely love it! Congratulations you two.
Set Ascending Direction